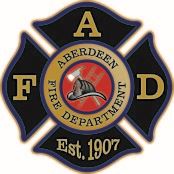 Our Mission is to provide the Citizens of Aberdeen protection from uncontrolled fire and hazardous materials through prevention efforts and suppression activities, and provide comprehensive pre-hospital emergency medical care to the sick and injured.

The City of Aberdeen is located 100 miles south of Seattle Washington, about 30 miles from the pacific coast. Situated in the heart of Grays Harbor County, Aberdeen has deep roots in the forestry and fishing industry. At the turn of the 20-century, the logging industry boomed and the city grew. At one time numerous sawmills dotted the city. The city itself is primarily made up of older wood-frame balloon construction homes, with a downtown core area containing un-reinforced masonry, with little or no built in fire protection. In October of 1903 the city lost the majority of its downtown business district, including its brand new fire station to a devastating conflagration.

The Aberdeen fire department was first organized in 1890 by the merging of the Wishkah and Pioneer hose companies and the Relief hook-n-ladder company. As the city began to grow, so did the fire department, which became a fully career organization in February of 1908.

The Aberdeen Fire Department covers a service area of its city limits (10.5 square miles) and additional Emergency Medical Services coverage outside of the city that includes about 100 square miles. The Chehalis River divides the city, thereby requiring a main headquarters station on the north side and a sub station on the south side of the river. Both facilities were constructed in 1966. In addition to a Chief and Assistant Chief, staffing consist of 33 uniformed personnel, comprising three platoons and two daily civilian administrative employees.

A daily on duty crew of eight to ten personnel staff both stations, utilizing an engine, ladder, command vehicle and medic unit. Each shift is supervised by a 24-hour on-duty Battalion Chief.